At some point in your business career, there will have been a jaw-dropping moment where somebody explains something, or you learn something new about the tech you use that stops you in your tracks for a few moments. This is, at least, until you spot somebody that you can share it with!

Well, below are a few of the best information technology facts, that’s ‘make the most of it time’ as the unbelievable is becoming more of a reality each and every day. 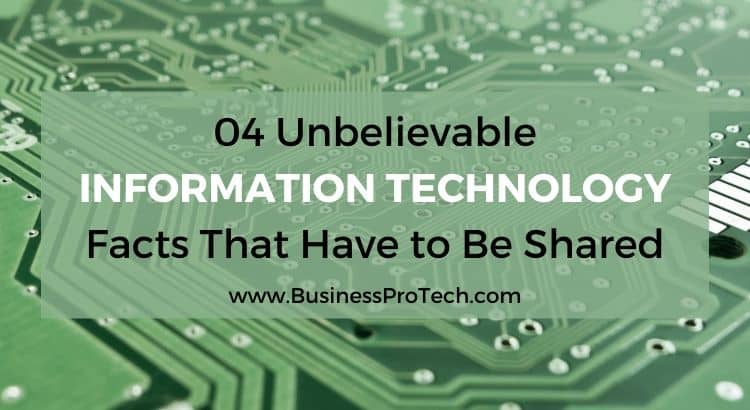 You may or may not know that some computer enthusiasts use water cooling systems in order to keep their computer chips nice and cool. If that’s news to you then it might seem a little odd, computer, electricity, water, surely that’s a recipe for disaster?

Interestingly enough, it’s not, if done properly, using specially designed blocks and pumps that replace cooling fans which are linked together by barbs, tubing, and a radiator to dissipate the heat.

Very similar to the cooling system used to prevent your car engine from overheating and, the basic principles haven’t changed since their introduction because water is so efficient at cooling things down and maintaining low operating temperatures, so much so that even some managed IT services use similar cooling systems for their servers.

Going one step further, there are actually computers that are powered by water! A little harder to explain, you might want to look into that one yourself to get your head around it.

It will be a shock to some that websites such as Wikipedia are actually monitored, maintained, and serviced by bots. You may already know that the information on Wikipedia is made up of information already on the internet, which may have been instrumental in helping you to start your business.

It takes the most relevant details of your subject and puts all the information in one place so that when you want to know about something, it’s all there for you, ready and waiting.

Various sources point out that there are some 2500 bots that are actively tasked with performing specific tasks for the 50million+ pages of English content. And, they are not alone, certainly, if you take into consideration organizations like Google (https://www.google.com), those guys are on another level when it comes to automation.

3. You Missed the Boat

On the subject of Google, one of the biggest, if not the biggest companies in the world, when you look into a bit of their history, it might be news to you that Google was actually up for sale but the deal fell through.

Money-wise, figures around the 7.5 billion mark were on the table, but after further investigation of how the Google algorithm system works, the buyer apparently established that there could be a conflict of interest that could potentially cause harm to their business.

Despite the deal falling through, it didn’t really affect the net value of the organization, mainly because they are so far advanced they have a uniqueness that simply cannot be found anywhere else.

Most people won’t be able to help themselves when it comes to looking for this page after reading the subtitles and who can blame them?

If nothing else, it’s a piece of iconic history that marked the start of something that has grown faster and, to a size that not many would have thought possible!

This site uses Akismet to reduce spam. Learn how your comment data is processed.

Find Us On Social!